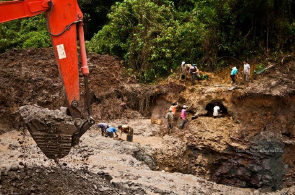 How much do we value our smart fashion?

How much do we value our brand new phone that is only slightly different from the previous one, for the cruel loss of human rights, the wastage and dumping?

Around the world the relentless hunt for industrial minerals to satisfy our marketed need for consumer goods, is producing conflicts, devastates communities, human rights disregard while at the same time it increases radicalism and environmental degradation.

European Governments and Companies turn a blind eye while purchasing blood produced materials from conflict zones. Disheartenedly, this is only the current part of the equation as the long term impact to the resource security and the environment could potentially impact many more as price increase due to radicalism and the effects of soil degradation will take hold and start impeding our livelihoods. Never mind our moral standing.

While the European Commission has begun a process to review its standards policy on the acquisition of minerals, the drafts coming out of the meetings look hopelessly at odds with dire situation on the ground as it is not binding and there is no way to enforce it. The power lies within us, the European political process and ultimately in our consumption patterns.

CARDET along with 12 more environmental and awareness raising NGOs across Europe and South America are joining forces to help bring this important issue to light and provide a voice to the disenfranchised communities across the world as well as educate the General Public for the current situation in an effort to swerve popular sentiment towards a more sustainable pathway of extraction of minerals and sustainable consumption.

The project was officially launched in Berlin on the 27th of March by our partners Christian Initiative Romero (CIR) and PowerShift who focused on the destabilizing effects of purchasing raw materials from conflict zones and the devastating effect to the human livelihood and the environment.

The campaign Stop Mad Mining aims at empowering local communities, inform local population for their involuntary role and suggest ways of action that could remedy this situation. The campaign runs in conjunction with the “Green Go Short Film Contest” organized by our Hungarian partner “CEEweb” focusing on over-consumption and social and environment consequences or raw material extraction.

To learn more about extraction practices and to keep informed, please visit our Facebook page Stop Mad Mining and for the Film Festival.